Social Media Saved The Prom! The Revolution With A True Fairy-Tale Ending.

I just recently told you about James Tate.

James Tate and His Date. 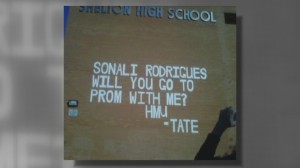 According to Connecticut teen James Tate, he thought a written invitation would garner his a “Yes” from his date…  here’s how he did it… giant letters on the side of the building at Shelton High School.

After seeing Tate’s invitation on the building, school officials banned the teen from the Prom altogether.

It triggered an international controversy and  HUNDREDS of THOUSANDS exploded a digital revolt!

The web was ON FIRE and exploded.

School officials had NO IDEA of the giant social media beast they’d awakened.  And you’ve GOT to see what’s happened since!

The firestorm ignited a powder keg that exploded on Social Media.

Tate and Rodrigues told their story of romantic woe last Thursday, and it quickly snowballed.

A Facebook Page: Let James Tate Go To Prom garnered some 200,000 fans. And that’s just one of several Facebook support pages. About 100 students staged a school sit-in Friday, and the town’s mayor said he received emails from as far away as China and Australia voicing support for the star-crossed couple. Even Connecticut Governor Dan Malloy weighed in, saying that while rules were broken, “it doesn’t seem as though the punishment fits the crime.”

Now they’re getting even more National attention.  They appeared again on the  Today Show with Matt Lauer

And while becoming international celebrities would seem to signal that James and Sonali are shoo-ins to be named prom king and queen, Rodrigues told Lauer she would prefer, on her big night, to fade into the woodwork “as much as I can.”.  (Um, newsflash: NOT!)

“I think we will still manage to have fun,” Tate said. “I think this has been blown completely out of proportion, but it’s cool.”

In his true gentleman style, there’s even a Facebook Page called James Tate Thanks You

Now it looks like the Prom Prince and his Princess WILL get the last dance.

There’s times when I (in all my reigning parental wisdom) deliver consequences that end up feeling more like punishment for me. And I know there are times, out of anger, exhaustion or frustration, I’ve given my child a punishment that in retrospect seemed a bit harsh. Sometimes though, as a parent, you still have to follow through on it or else risk having every decision you make challenged. Sometimes though, you have to suck it up and admit that you were wrong.

(I’m just relieved that – at least for now, my kids do not hold punishment mutiny via social media.  No, Revolutions in my house are built of  Legos.)

What do you think? Did the head master do the right thing by reversing her decision?

Tell me your thoughts!  Either her, on The Empowered Mom Page or on Twitter:  @TheEmpoweredMom

Be Heard, Be Empowered!