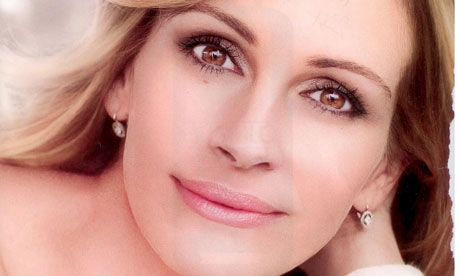 You’ve seen the magazine ads.  You’ve stared longingly and wished for that flawlessness.  Admit it.  The porcelain skin. The lack of blemishes.  In fact, the complete NON-existence of blemishes, dark circles, spots, pimples – COMPLETE PERFECTION.  And COMPLETE BULL.

Airbrushed Perfection is Brushed Off and Banned! Now, some of those airbrushed ads aren’t just making wrinkles disappear – the ads themselves are disappearing. In an extraordinary move, some advertisements have now been banned! These are the ads, featuring Julia Roberts and Christy Turlington, at the center of the “Cover-Up Controversy”:

Flat out, these two women are stunning beauties – and more than likely look amazing regardless of circumstances.  And both are used to being in the limelight, but now the light is focusing more on what’s NOT seen.  Both are smack dab in the center of a make-up misstep.

British authorities are claiming the pictures were “overly airbrushed” and call the ads “misleading.”

The British watchdog authority, The American Standards Authority, is cracking down on two L’Oreal foundation ads after a Liberal Democrat MP, Jo Swinson, complained that they pass off airbrushing as makeup results. Swinson is known for crusading against advertisers who portray unrealistic images of women and now brought complaints against a Julia Roberts Lancôme ad and a Christy Turlington Maybelline ad (both Lancôme and Maybelline are owned by makeup giant L’Oreal). The Lancome ad is for a new product called Teint Miracle foundation; the other product is called The Eraser by Maybelline.

And problem is, the cosmetics company refused to disclose the unretouched – or ‘before’ photos – which added fuel to the fire.

While L’Oreal refused to release the original photos, they did release this statement defending their position, “We do not believe that the ad exaggerates the effect that can be achieved using this product.”

At a time when digitally distorted reality is the norm, the danger is creating unattainable goals with far-reaching social, psychological effects on our society.  Not only is the ad dangerous – let’s remember the bigger picture: half of young women between 16 and 21 say they would consider cosmetic surgery — and eating disorders have more than doubled in the last 15 years!

You can almost hear the sounds of global applause for the watchdog group dispelling the Photoshop fake.

Let’s face it, who can’t use a bit of highlighter, concealer and cover-up?? But not when we are chasing an IMPOSSIBLE goal.  Let’s uncover the truth and use make-up to enhance natural beauty and empower women to feel their best — not cover a made-up version no one can achieve.