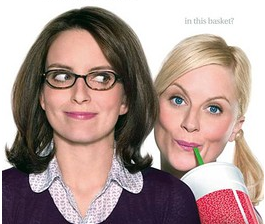 Happy (almost) Mother’s Day! Two very funny women have been in the news lately for their take on working motherhood:

–Comedian Amy Poehler, at the Time 100 dinner for influential people, gave a shout-out to those often unheralded people who make many of our lives possible: child-care workers:

I have thought very hard and long about what has influenced me over the past couple of years, and since I have been at this dinner in 2008, I have given birth to two boys and I’ve left Saturday Night Live and I started my own TV show, and it’s been a crazy couple of years, and I thought who besides Madam Secretary Clinton and Lorne Michaels have influenced me? And it was the women who helped me take care of my children. It is Jackie Johnson from Trinidad and it is Dawa Chodon from Tibet, who come to my house and help me raise my children. And for you working women who are out there tonight who get to do what you get to do because there are wonderful people who help you at home, I would like to take a moment to thank those people, some of whom are watching their children right now, while you’re at this event. Those are people who love your children as much as you do, and who inspire them and influence them and on behalf of every sister and mother and person who stands in your kitchen and helps you love your child, I say thank you and I celebrate you tonight. [Hat Tip: New York Magazine]

–Meanwhile, here’s the “prayer for a daughter” written by fellow Saturday Night Live alum Tina Fey, in her hilarious new book “Bossypants.” The line that resonated the most with me:

Lead her away from Acting but not all the way to Finance. Something where she can make her own hours but still feel intellectually fulfilled and get outside sometimes And not have to wear high heels.

What would that be, Lord? Architecture? Midwifery? Golf course design? I’m asking You, because if I knew, I’d be doing it, Youdammit.

Poehler and Fey have hit upon some universal truths of working parenthood:  If possible, get — and profusely thank — help for your family.  (Few working parents can wing it alone.) And most of us struggle with finding the right mix of career fulfillment vs. time with family; it’s hard to find that “perfect” career path that will allow us to have both at the same time.

Readers, how influential are child-care workers in your family’s lives? How have you thanked them?  And for pre-Mother’s Day fun, what would be in your prayer for your children?  What are your Mother’s Day plans — or on your wish list?

From the Wall Street Journal